Wow. Warped Tour 2009? Awesome! I had my doubts, I’ll admit it, and now I can’t imagine why I ever had any. I saw some of the prettiest people I have ever seen, but I also saw some of the ugliest people I have ever seen in my life. There were people with gross piercings, girls all decked out in gothic clothing, girls with wayyy too much makeup on, lesbians (everywhere!), pimple-covered faces and people that barely had anything covered. I saw a bunch of girls that looked to be about twelve years old (and were probably even younger) that looked way too young to be in a place like that. They had no fear, though. Like most of the youth these days. They do what they want without respecting others. How annoying.

We got there and headed over to the blow-up thingy that had the stages, bands and times they were playing on it, and who should be playing on the stage near us whilst we were looking? Underøath! I saw Aaron, heard them announce “this next one is an oldie!”, realized it was “Its Dangerous Business Walking Out Your Front Door” and you’d better believe I ditched my people and squeezed through the crowd until I could see (even though I still couldn’t really see). The drowning in my sleep part melted me. 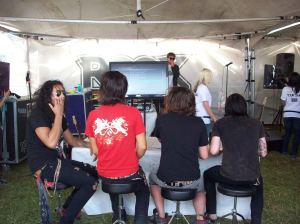 We got our times and started walking around. We waited at the Rock Band tent for Escape the Fate to show up and start judging the “bands” that were playing the video game. When they arrived (accompanied by several squeals issued by moi), and sat down RIGHT IN FRONT OF ME (I was in the front right up against the “CAUTION” tape) I started snapping pictures left and right. Robert turned around and waved, and yes, I got a picture of it. I only wish I could have had my camera out for when he turned around again and flicked everyone off. That was awesome.

We hurried off to watch Chiodos after that. I surprised myself by knowing most of the words to their songs (much like I did back in November). We left that stage to go see Scary Kids Scaring Kids at the Hurley stage. I was so looking forward to seeing them, but that quickly melted away. I realized that I did not know ANY of the words. I knew the beat and the guitar parts and stuff, but because I barely ever understood what the singer was singing, I couldn’t sing along. They played “My

Darkest Hour” (my favorite song by them) but it wasn’t as great as I thought it would be. Kind of disappointing, but the crowd wasn’t all that into it either, so that was part of the problem. There really wasn’t much crowdsurfing during their set.

Madina Lake had the most energy out of anybody.

A big hairy guy almost ruined it for me, but my boyfriend and I scrambled around until we were as far away from him as we could get. I have not taken the time to listen to them in a long time, but every word to every song came back to me as soon as the music started playing. They opened with “Adalia,” played “House Of Cards,” mixed in some new stuff (which sadly I did not know) and ended with “True Love.” After being disappointed by Scary Kids Scaring Kids, Madina Lake provided the perfect pick-me-up.

Then, after being crushed in like sardines for A Day To Remember, I made my boyfriend and friend get up so we could get in the front

for Escape the Fate’s performance (FINALLY!). Once again, they opened with “The Flood.” They had enough energy, but not as much as Madina Lake. But I love Craig, Monte, Max and Robert anyway. Monte looked like a happy little Asian kid (his hair was lovely), Robert looked like Slash (like he normally does), I saw more of Max this time since I was on the side of the stage where he normally resides, so that was great, and Craig was his usual crazy fun-loving self. They performed “Situations,” surprised me with their performance of “Ashley,” played “You Are So Beautiful,”  rounded out the set with “10 Miles Wide” and ended with “This War Is Ours (The Guillotine II).” During one of the songs (I can’t recall which one) someone crowdsurfed and kicked me in the nose. It was awesome, but that’s why my nose is killing me right now. Before “10 Miles Wide” Craig said “now, I want to see every girl on top of some guy’s shoulders! Look at the guy in front of you, ladies, and hop on!”  Some guy turned around and looked at me, but I looked to my boyfriend who was standing behind me

with his arms around me and motioned for him to get down so I could mount his shoulders. I hopped on, got a GREAT view of the stage, and danced on his shoulders to the song whilst singing along. Craig jumped into the crowd and sang with a girl who was on someone’s shoulders, and boy, was I jealous! But, it was still awesome. I got down after that song, and my boyfriend pulled me out of the way before we were pushed into the Wall of Death.

Afterward I couldn’t stop raving about Escape the Fate’s performance. It was so much better than it had been back in November at Town Ballroom. My boyfriend wanted to watch Breathe Carolina, so we did (yuck!), but all I was thinking about was Escape the Fate.

We left after Breathe Carolina, and wandered around the parking lot looking for his mom’s car. Then we hopped in and left. It was definitely a fun time. I can’t wait to see Escape the Fate for the third time. I promised my boyfriend that I would crowdsurf at that one. I’m little enough. 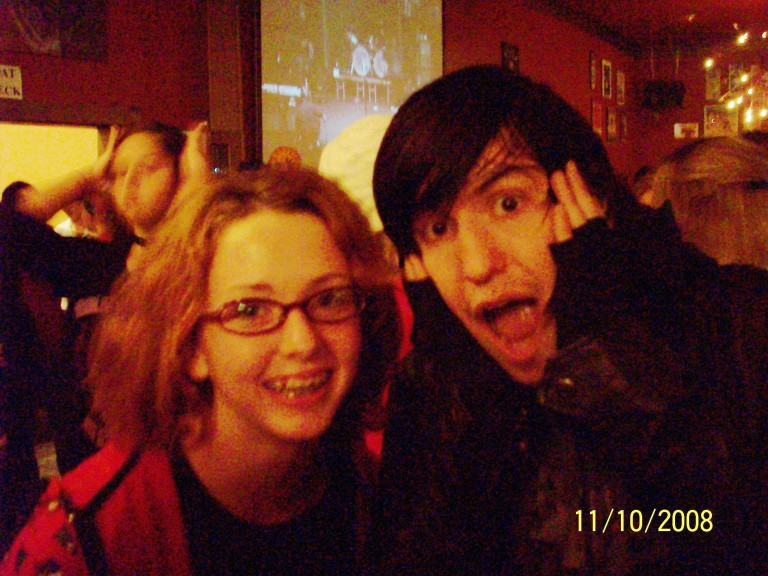 One thought on “The reason why my nose hurts”