I felt my cheeks redden the more Tom talked.

He showed me some of his own designs and a few projects he’d been working on, both for his internship and for his portfolio school classes. I sat and stared, mouth open, fist rammed into my cheek.

Wow, I realized, I SUCK.

I know that’s not the initial reaction Tom wanted, but it’s the one I experienced. He showed me more, had me scroll around to build up my own ideas, taught me the basics of the infamous pen tool in Adobe Illustrator and then left the room.

In the meantime, I messed around on Illustrator and couldn’t figure it out. So, much to my chagrin, I tweeted this: 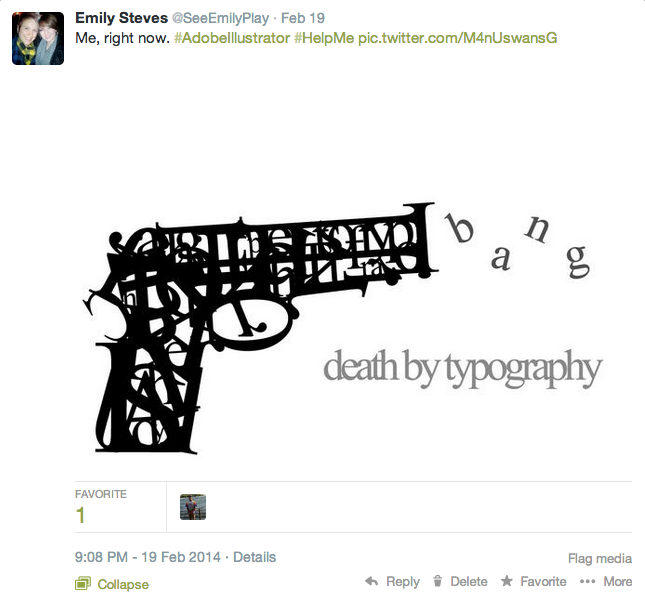 I’ve been thrown into design projects since my junior year of high school when my then-English teacher requested I take over the position of yearbook editor for my senior year. Because I’m a masochist, I accepted without thinking (then proceeded to stay up late all summer, worrying about the 144 pages I had to fill). I knew nothing about design. Absolutely nothing. But, because I’m Emily, I worked at it, spending hours in my school’s computer lab, ultimately recruiting my mother to sit by me at home and proofread as I wrote names upon names upon names before submitting a page a minute before its due date. Phew. Deep breath.

I haven’t changed much in terms of procrastination –– I just submitted a newsletter that is due to debut today, as in Wednesday, March 12 today –– but shit, have I learned a lot in my three years here. Currently, some students in the Integrated Marketing Communications program here at Bona’s are working on their final book to give to the judges during their respective presentations. I’ve heard complaints (“How am I supposed to create this book when nobody taught me InDesign?”) and feel my colleagues’ pain. But still, I appeared at Bona’s curly haired and freckle faced in September of 2011, sat at one of the school’s iMacs and began learning the ins and outs of InDesign. With some help along the way –– though none from my oldest brother whom I’ve heard is actually quite the design guru –– I’ve come so, so far, though I still have a ways to go. Tom and the hotness of my cheeks that day reminded me of that.

So yeah, it sucks that St. Bonaventure doesn’t have a proper graphic design/desktop publishing program or even a class on it, for that matter. But nearly every computer is equipped with the software, leaving students absolutely no excuse for their failure to dabble around. Like I’ve written in nearly every cover letter I’ve submitted, “I’ve learned that versatility is the key to becoming an effective communicator.” I’m going to learn Illustrator. Just watch me.

…after I sleep and get a few other projects done. Oh, and after my neck stops hurting. I’ve been staring at these Apple computers far too often as of late.